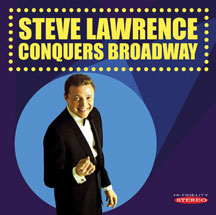 'Steve Lawrence Conquers Broadway' contains twenty-six Broadway showstoppers from Steve Lawrence, one of the most popular vocalists of all time. Steve Lawrence had numerous songs on the hit parade including the chart-topper "Go Away Little Girl" before conquering Broadway in the musical What Makes Sammy Run. On this CD are twenty-six show tunes performed magnificently by Steve Lawrence. Hear him sing show-stoppers from iconic shows such as Gypsy, Oklahoma!, The Sound of Music, West Side Story, My Fair Lady and The King and I.