The Eurocrypt Of Christopher Lee Collection 2 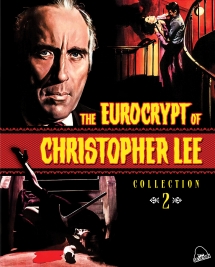 Eurocrypt Collection 2 presents five of the most unexpected, underrated and underseen films of the iconic actor's European career. Immediately following HORROR OF DRACULA, Lee reprised the role in the quirky 1959 Italian comedy UNCLE WAS A VAMPIRE. Lee speaks fluent German opposite Klaus Kinski for the crazed 1962 krimi THE SECRET OF THE RED ORCHID. In the 1974 UK psycho-thriller DARK PLACES, Lee toplines a cast that includes Joan Collins, Herbert Lom and Jane Birkin. Lee's final performance as The Count in the 1976 French comedy DRACULA AND SON can at last be seen in its superior Director's Cut, while the ultra-rare 1989 Dutch drama MURDER STORY brings Lee into the sex shops of Amsterdam. Each film has been remastered from original negative materials with over 15 total hours of trailers, commentaries, alternate cuts, vintage interviews and new featurettes, plus the DRACULA AND SON soundtrack and an all-new 100-page book by Lee biographer Jonathan Rigby.

UNCLE WAS A VAMPIRE

THE SECRET OF THE RED ORCHID

Sir Christopher Lee was not only a cinematic titan who towered in the literal sense, but one who reached the heights of consummate merit and tremendous skill. Simply put, he was a rare breed of actor that elevated every film he featured in.

—A Taste of Cinema

Yes, he was the finest screen Dracula we've ever seen. But there was so much more to the late Christopher Lee than monsters.

Each moment Christopher Lee was onscreen was mesmerizing; a powerful domineering presence that demanded attention and kept its audience under his thrall.

Regardless of the role, Sir Christopher Lee always made for a welcome screen presence; whether he turned up as a force for good or as the Prince of Darkness himself, you knew you were in for a good time.

Nobody was better at expressing wild animosity hidden beneath a veneer of elegance. He was also really funny. Lee's gifts were extraordinary.

Severin has stuck to their promise of delivering underrated and under-seen gems in Lee's European career with a collection of six films, including Lee's tenth and final appearance as Dracula in the 1976 horror comedy Dracula and Son.