THE EVIL ONE HAS COME TO TAKE THE SOULS OF THE YOUNG! 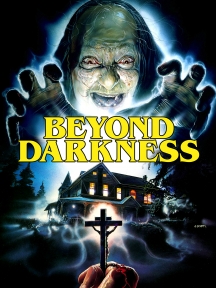 WITH ALL-NEW SPECIAL FEATURES AND SOUNDTRACK CD Shortly after completing TROLL 2, writer/director Claudio Fragasso and co-writer Rossella Drudi (SHOCKING DARK) returned to America to combine elements of THE EXORCIST, POLTERGEIST, THE BEYOND and their own insane aesthetic for what critics - and Fragasso/Drudi themselves - consider to be their horror masterpiece: When a Satanic child killer is executed, she transforms the new home of a young reverend and his family into a portal to Hell. Gene LeBrock (METAMORPHOSIS), David Brandon (CALIGULA 2) and Michael Paul Stephenson (child star of TROLL 2 and director of BEST WORST MOVIE) star in this "batsh*t crazy good time" (EuroCult AV) shot by Joe D'Amato with costumes by Laura Gemser, an epic score by Carlo Maria Cordio (NIGHT KILLER) and released in Italy as EVIL DEAD 5, now featuring new interviews produced exclusively for this edition.

Horror genius... Superior on every level. A so-great-it's-awesome film that really shows off Fragasso's talent and understanding of the genre.

Yes, it goes nuts... An eclectic dish featuring the occasional feverish burst of madness. It arrives out of a tradition that completely warped normal standards.

Beyond Darkness has some interesting elements, and one of those is the rather disturbing performance by Mary Coulson. As usual with Severin releases, the on disc supplements are very enjoyable, and score fans will most likely appreciate the included soundtrack CD.