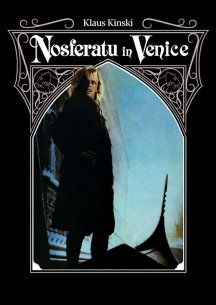 What was intended to be an unofficial sequel to Werner Herzog's NOSFERATU instead became one of the most notoriously fascinating productions in EuroCult history: Klaus Kinski - "now fully in the grip of the 'batsh*t crazy' phase of his career" (Rock! Shock! Pop!) - gives his penultimate performance as the legendary vampire resurrected in modern-day Venice with an insatiable hunger for warm blood and rough sex. Donald Pleasence and Academy Award® winner Christopher Plummer co-star in this sumptuously insane shocker that features music by Oscar® winner Vangelis (CHARIOTS OF FIRE), employed five different directors - including Mario Caiano (NIGHTMARE CASTLE), Luigi Cozzi (PAGANINI HORROR), writer/producer Augusto Caminito and reportedly Kinski himself - and still delivers "one eye-popping scene after another" (Cinema Retro), now scanned in 2k from the original negative.

'A MEMORABLY STRANGE EXPERIENCE... An often bizarre but entertaining treat from a major golden age in horror cinema.'

Nosferatu in Venice has its own distinctively moody atmosphere, one helped by good use of locations and a generally gothic feeling production design. This is by and large a nice looking, and at times rather impressive, transfer, especially in more brightly lit moments, where the palette really pops with a good deal of authority and detail levels are consistently appealing. Severin has done fans of Kinski and the film a major service by providing the really excellent documentary charting Kinski's final years.

Severin Films has given the oft-maligned and long-forgotten hole in Klaus Kinski’s filmography, NOSFERATU IN VENICE, the five star treatment... One of Severin’s most impressive and intriguing releases so far this year.

Severin Films new Blu-ray release is a step up from previous DVD releases with a healthy picture and a wonderful documentary. If you're at all interested in Kinski and his exploits, this is definitely one to pick up.