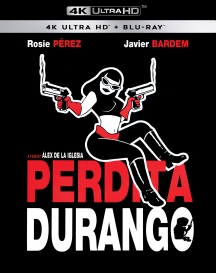 'ONE OF THE BEST FILMS OF THE YEAR. Dark, violent and visceral, like Jodorowsky directing THE WILD BUNCH.'

'UTTER MORAL DEPRAVITY. A demented movie that takes the oversexed surrealism of WILD AT HEART to delirious new levels. It richly merits a cult.'

Bardem and Perez are unforgettable, and fans of either or both of these performers who haven't seen this film are in for a (disturbing?) treat. Severin is offering a release with secure technical merits and the 1080 disc has some nice supplements. Recommended.

Rarely will you find a film as simultaneously repellent and magnetic as Perdita Durango. It’s a fascinating piece of work, and though it wasn’t welcomed with open arms initially, it has since been recognized as one of Alex de la Iglesia’s best works. Severin’s UHD release of the film, along with The Day of the Beast, re-establish him as a filmmaking force to be reckoned with when left to his own devices. This is a terrific release and deserves its reappraisal.