Álex de la Iglesia delivers the smash hit that remains one of the best spanish horror comedies of our time. 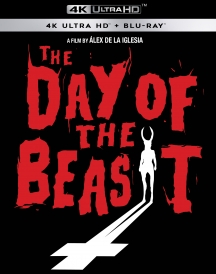 In between his cult hit debut ACCIÓN MUTANTE and proudly depraved PERDITA DURANGO, writer/director Álex de la Iglesia delivered the international smash that remains one of the best horror comedies of our time: When a rogue priest (Álex Angulo of PAN'S LABYRINTH) discovers the exact date The Antichrist will be born, he'll enlist a Death Metal record store clerk (Santiago Segura of KILLER BARBYS) and a cheesy TV psychic (Armando De Razza) for an urban spree of "gore, sacrilege and twisted humor" (San Francisco Examiner) to prevent the Apocalypse by summoning Satan himself. Terele Pávez (800 BULLETS) co-stars in this "classic of modern Spanish cinema" (Screen Anarchy) - winner of 6 Goya Awards including Best Director - now restored in 4k from the original negative and loaded with all-new Special Features.

'A MUST-SEE SPANISH HORROR FILM... A fast-paced thrill ride that's as funny as it is horrific and offensive.'

'HOWLINGLY OUTRAGEOUS AND WILDLY UNIQUE... It's nothing short of a hangman's slapstick masterpiece.'

If this is a sign (of the Beast?) of what Severin has in store for their 4K UHD offerings, my hunch is fans will be generally well pleased. Recommended.

Filled to the brim with special features that enrich the little apocalyptic world that the film has created, this is a release I highly recommend you add to your collection... Sure to satisfy gorehounds and horror fans everywhere!

Worthy of greater appreciation in the US, The Day of the Beast is the type of well-crafted dark fantasy with which directors like Guillermo Del Toro would later become synonymous. Severin’s presentation of the film, and the extras that go with it, is excellent. This 4K release is the perfect way to experience the film for the first time.