The Eurocrypt Of Christopher Lee Collection 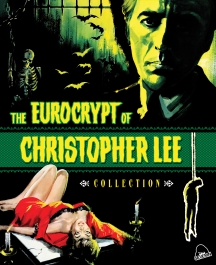 He remains one of the most beloved horror/fantasy icons in US/UK pop culture history, but Christopher Lee delivered several of the most compelling, acclaimed and bizarre performances of his entire career in 1960s Europe. THE EUROCRYPT OF CHRISTOPHER LEE brings together five of these Lee classics - the 1964 gothic shocker CRYPT OF THE VAMPIRE; the 1964 cult hit CASTLE OF THE LIVING DEAD co-starring an unknown Donald Sutherland; 1962's celebrated SHERLOCK HOLMES AND THE DEADLY NECKLACE; 1967's lurid favorite THE TORTURE CHAMBER OF DR. SADISM and the rarely-seen 1963 oddity CHALLENGE THE DEVIL - with the 24 surviving episodes of the 1971 Film Polski anthology series THEATRE MACABRE hosted by Lee, all remastered from original negative materials with over 10 hours of trailers, rare promos, audio commentaries & vintage interviews, plus the CASTLE OF THE LIVING DEAD soundtrack and an all-new 88-page book by Lee biographer Jonathan Rigby.

None of these films may be outright masterpieces, but several of them are surprisingly good, and they each have palpable moods, with above average production design, some evocative cinematography, and of course the always watchable Christopher Lee. Severin has provided a really handsomely packaged set with largely commendable technical merits and a glut of supplementary material, both on disc and in the beautifully done collector's booklet. Highly recommended.

...It's hard to imagine Severin Films being able to top themselves. However, they've managed to do so with The Eurocrypt of Christopher Lee Collection. It's a jam-packed release with not just interesting and entertaining films, most of which have been rarely if ever available, but also a bevy of amazing bonus content. This is an amazing release and it belongs on any self-respecting horror fan's shelf. Highly recommended!