WORLDWIDE PREMIERE OF THE UNRATED VERSION WITH ALL-NEW SPECIAL FEATURES 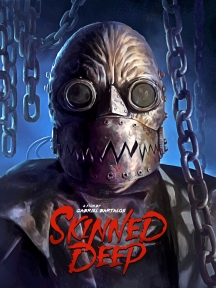 His mind-blowing work as an FX artist has included everything from Frank Henenlotter's BRAIN DAMAGE and FRANKENHOOKER to Matthew Barney's CREMASTER CYCLE. And for his 2004 debut as writer/producer/director, Gabe Bartalos created this "demented gift from the B-Movie Gods" (Bloody Good Horror) about a rural clan of psychotic freaks, the killing spree "that takes us places and shows us things we've never seen before" (Dread Central) and the final girl that may be their depraved undoing. Warwick Davis (LEPRECHAUN) and Jason Dugre (SAINT BERNARD) star - with an appearance by fandom legend Forrest J. Ackerman - in this "brutal, bloody forgotten masterpiece" (Morbidly Beautiful) featuring music by Captain Sensible of The Damned, now scanned uncut in 2K from the original negative for the first time ever.

'A GORE LOVERS DREAM COME TRUE... This is what old school horror is all about. It offers monsters, tons of kills and some of the most eccentric scenes in the entire genre.'

'IT'S THE TEXAS CHAINSAW MASSACRE MEETS BRAIN DAMAGE... Bartalos barrels through convention, deconstructs all that is considered normal and concocts surreal imagery of a world gone mad.'

Skinned Deep certainly has all the earmarks of a directorial vision. The film has a lot going on, and some decidedly surreal moments that play like an acid trip transferred to celluloid. Bartalos' makeup effects are quite good, technical merits are solid, and the supplements are enjoyable.