WHEN THE BUTCHER GOES BERZERK... 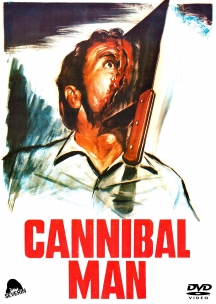 From subversive Spanish writer/director Eloy de la Iglesia comes the international hit and DPP 39 'Video Nasty' that remains among the most notorious and misunderstood shockers of the '70s: When a slaughterhouse worker (Vicente Parra of NO ONE HEARD THE SCREAM) accidentally kills a man during a fight, it will trigger a desperate descent into madness, mass murder and "the most horrific use of a single apartment since Polanski's REPULSION" (Mondo Digital). Emma Cohen (CUT-THROATS NINE) and Eusebio Poncela (LAW OF DESIRE) co-star in this "unforgettable mix of Euro arthouse and exploitive sleaze" (DVD Drive-In) - also known as THE APARTMENT ON THE 13TH FLOOR and WEEK OF THE KILLER - now featuring both the International and extended Spanish Version newly scanned from the original negatives for the first time ever.

'NOT YOUR AVERAGE NASTY... De la Iglesia may never be a household name, but his most famous film deserves renewed critical and historical attention.'

Not just another horror/gore flick, but a dark, intelligent study of one man's descent into madness.'

'A FORGOTTEN GEM, SEVERAL DECADES AHEAD OF ITS TIME.'

A fascinating dissection of a man caught by the vagaries of fate and his own temper into an escalating series of tragedies. With a number of potential major caveats offered in terms of what individual viewers can stomach, and perhaps especially in light of the really excellent supplements included, The Cannibal Man comes Recommended.

Cannibal Man is a hard-ass thriller with plenty of horror biz to satisfy!

If you find yourself asking for more intellectual engagement from your video nasties, The Cannibal Man is here to deliver that and so much more. Iglesia may have been a filmmaker to deal in shock, but never without a purpose. This release comes highly recommended.