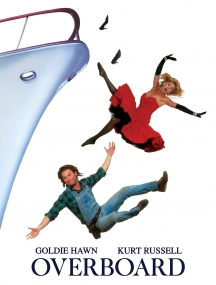 Get ready to fall in love all over again with one of the most popular romantic comedies of our time: Oscar®-winner Goldie Hawn and Kurt Russell star in this riches-to-rags love story about a snobby yacht-owning socialite (Goldie) whose accidental amnesia presents the perfect opportunity for a widowed local carpenter (Russell) to convince her she's his wife and mother to his four out-of-control kids. Edward Herrmann (ANNIE), Katherine Helmond (TIME BANDITS) and Roddy McDowall co-star in the 24-carat Goldie & Kurt classic from director Garry Marshall (A LEAGUE OF THEIR OWN, THE PRINCESS DIARIES) and screenwriter Leslie Dixon (MRS. DOUBTFIRE), now scanned in 2K for the first time ever.

A warm and funny movie.