...when the clock strikes death. 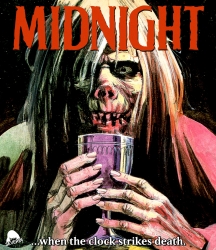 A decade after co-writing NIGHT OF THE LIVING DEAD, writer/director John Russo gathered members of George Romero's Pittsburgh crews to film a new shocker fueled by equal parts grisly grindhouse jolts and '80s satanic panic: Fleeing her pervy alcoholic stepfather (Lawrence Tierney of RESERVOIR DOGS infamy), a hitchhiking teen (Melanie Verlin) is abducted by a family of crazed homicidal rednecks for an ordeal of graphic butchery, shag carpet and devil worship. John Amplas (MARTIN) co-stars in this "greasy, grimy guilty pleasure" (DVD Talk) featuring gore effects by Tom Savini and executive produced by Sam Sherman (DRACULA VS. FRANKENSTEIN) - released in some US markets as BACKWOODS MASSACRE and seized in the UK as a Section 3 'Video Nasty' - now scanned in 4K from the negative of the long-rumored uncut version with all-new Special Features.

Shocking and depraved... How can you not love a movie that starts with a girl caught in an animal trap getting killed by children who pray to Satan?

A devious slice of exploitation... An effectively creepy and chilling vibe that exploits our fear of rural folk and satanic cults.