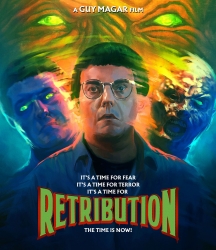 THREE-DISC COLLECTION INCLUDES U.S. THEATRICAL CUT EXTENDED DUTCH VIDEO VERSION REMASTERED SOUNDTRACK CD For his 1987 feature film debut, co-writer/director Guy Magar delivered what Bleeding Skull hails as "relentless, squishy joy that makes us angry we've lived this long without having seen it": On the seedy side of Hollywood, an emotionally fragile painter miraculously survives a horrific suicide attempt. But when a series of grisly murders rocks the city, he discovers he may be possessed by the vengeful spirit of a murdered local hoodlum. Dennis Lipscomb (EYES OF FIRE), Leslie Wing (THE FRIGHTENERS), Suzanne Snyder (WEIRD SCIENCE) and Hoyt Axton (GREMLINS) star in this "great lost gem with jaw-droppingly inventive splatter" (Blood Capsules) featuring a terrific score by Alan Howarth (THEY LIVE, PRINCE OF DARKNESS), now scanned in 2K from recently discovered pre-print elements with 2+ hours of all-new Special Features.

Relentless, squishy joy... It makes us angry that we've lived this long without having seen RETRIBUTION. It's a popcorn classic.

It reaches peak horror nirvana... Magar gives us an electricity-veined mania that feels like the movie took a hit of black coffee straight to its heart.

A surreal dayglo nightmare... This underrated masterwork encapsulates everything that was great about '80s horror.

Gory and wonderful... It has that forgotten cult charm and one of the most infamous '80s death scenes of all time.

A great lost gem... A stylish and assured debut for writer/director Guy Magar with some of the most jaw-droppingly inventive splatter ever seen.