Dick Cavett Show: And That's The Way It Is

Cavett has been host of his own talk show, in a variety of formats and on a number of television and radio formats 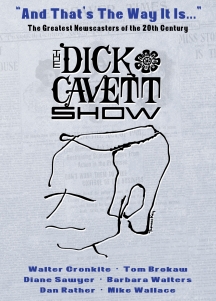 Since 1968, Dick Cavett has been host of his own talk show, in a variety of formats and on a number of television and radio formats. These releases were taken from episodes that aired between 1968 through 1996 and feature some of the best known news reporters of the era including Cronkite, Rather, Brokaw, Walters, Wallace and Sawyer. He has also gathered 7 Emmy nominations and 2 wins. News-people appearing include: Walter Leland Cronkite (November 4, 1916 - July 27, 2009: Cavett conducted two one-on-one conversations with Cronkite, October 16, 1974 and the other on March 11, 1982. Thomas John Brokaw (February 6, 1940) : Cavett and Brokaw chatted face to face on May 29, 1989 Daniel Irvin Rather (October 31, 1931): Rather and Cavett conducted their interview October 26, 1991 Myron Leon "Mike" Wallace (May 9, 1918 - April 7, 2012) : Mike Wallace was a participant on a Cavett panel that included Robert Klein, Joan Gans Johnson and Nicholas Johnson on June 30, 1970. Barbara Jill Walters (September 25, 1929): Walters was on a panel with Gig Young, Melvyn Douglas and fellow newscaster, Frank Reynolds, on October 15, 1970 Lila Diane Sawyer (December 22, 1945) : On November 18, 1985, Sawyer appeared on a panel with 60 Minutes producer Don Hewitt, Morley Safer and oddly, Teddy Ruxpin and Don Kingsborough (the man who introduced the Teddy Puxpin toy).

a warm, heartfelt look back

One of the best hosts for this format was Dick Cavett