Dick Cavett Show: Inside The Minds Of: Vol. 2

Cavett has been host of his own talk show, in a variety of formats and on a number of television and radio formats 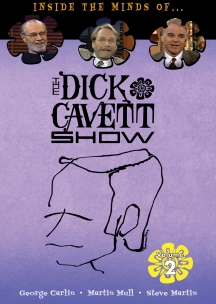 Since 1968 Dick Cavett has been host of his own talk show, in a variety of formats and on a number of television and radio formats. These episodes were taken from shows that aired between 1990 through 1995 and feature some of the insightful, thought provoking and satirical brilliance of George Carlin, Martin Mull and Steve Martin. Cavett has also gathered 7 Emmy nominations and 2 wins. Comedians appearing are: George Denis Patrick Carlin (May 12, 1937 - June 22, 2008) one of the most influential and revered comedians of his era. Lauded by Rolling Stone as second on their 50 best stand-up comics of all time. While Carlin appeared 5 times on The Dick Cavett Show, 3 were as a part of panels and we've chosen to use the two 'one-on-one' shows he did with Cavett on June 5, 1990 and December 1, 1992. Martin Eugene Mull (August 18, 1943) is a multi-talented comedian, actor, singer and artist but got his start in show business in 1970 after writing "A Girl Named Johnny Cash" for country star Jane Morgan. If you remember Garth and Barth Gimble, then you remember Mull's first major acting role. He started as Garth Gimble on "Mary Hartman, Mary Hartman" (produced by Norman Lear) which led to the spin off, "Fernwood Tonight", where he played Garth's identical twin Barth, with sidekick Jerry Hubbard (Fred Willard). Mull sat down with Cavett on June 4, 1995 during the time he was appearing on "Roseanne" and just before starting work on "Sabrina, the Teenage Witch. Stephen Glenn Martin (August 14, 1945) is a multi-talented individual, excelling at comedy, acting, producer, musician (piano and banjo, winning two Grammys for his prowess on the banjo) and playwright. Not a joke teller, per se, Martin's act was more absurdist and off beat...(who can forget the arrow through the head routine? Or 'excuse me'?) Steve Martin appeared just this one time on Cavett on December 17, 1992, after completion of 3 films in 1991 and 2 more in 1992.

Watching his show was like attending a sophisticated cocktail party

The shows are mostly wonderful; particularly those with the luxury to concentrate on a single performer

it takes the time to explore the life and art of these great performers with impressive depth.