She conquered every producer's couch in town! 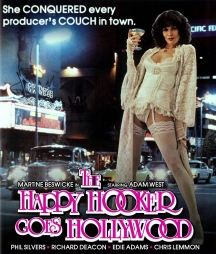 Martine Beswick (From Russia with Love, Thunderball) and Adam West (TV's Batman) star in the most raunchy Happy Hooker film yet! When Xaviera (Beswick), now a best-selling author, has Tinseltown calling with a less-than-savory offer for her book, she flexes her independent spirit, deciding to film the movie herself!