Two warriors, Harmony and Anderson, dare to defy their post holocaust existence and go in search of a peaceful life. 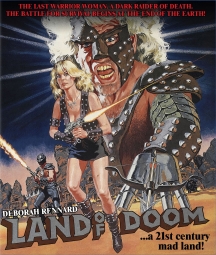 Deborah Rennard (Dallas, Lionheart) stars in this postnuke classic. Much of the planet's population and environment has been destroyed in a nuclear holocaust. Those who are still alive live in caves, and many roam the wasteland in marauding gangs. But some survivors, like Harmony (Deborah Rennard) and Anderson (Garrick Dowhen), want a better life and go in search of rumored paradise, a city called Blue Lake, where no rape, murder and pillaging are said to exist. However, the maniacal metal-faced Slater (Daniel Radell), Anderson's rival, wants them dead as they all head to the final climax where only the strongest will survive!