An aging hitman takes on a competent and ruthless apprentice. They become an unmatchable team until they start to realize someone has betrayed them. 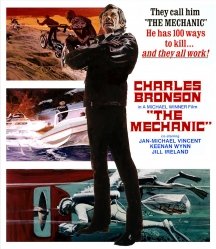 Arthur Bishop is a mob hit man who operates in an uncompromising world where conventional rules of morality don't apply and one wrong move could cost him his life! He's always worked alone; but, as age catches up with him, Bishop takes on a competent and ruthless apprentice and teaches him everything he knows. Together they become an unmatchable team of globetrotting killers ... until the pupil's ruthlessness puts him on a collision course with his teacher!

One of Bronson's signature pieces from the era.

'The Mechanic,' starring Charles Bronson, is one of the best crime films of all time.

Scorpion Releasing and Ronin Flix have released a new Blu-Ray with a sturdy A/V presentation and some fun special features. If you are a Charles Bronson fan, you will not want to miss his work in this one. Recommended