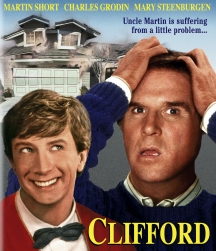 Get ready for mischief, mayhem and madness with this outrageous comedy starring the truly hysterical Martin Short (Three Amigos, Innerspace) with Charles Grodin (Midnight Run, The Heartbreak Kid), Mary Steenburgen (Melvin and Howard, Time After Time) and Dabney Coleman (9 to 5, WarGames). Clifford is crammed with enough laugh-out-loud moments and brilliantly subtle, sophisticated humor to spoil you for good! Smart, hyperactive and dangerous ten-year-old Clifford (Short) has a lifelong dream: to visit the Dinosaur World theme park. Happily, his uncle Martin (Grodin) has agreed to take him. But when Martin suddenly reneges on his promise, Clifford hatches a devious plan to get even and teach his uncle that all work and no play makes Clifford a very bad boy! Written by William Porter (Back to School) and Steven Kampmann (The Couch Trip); and directed by Paul Flaherty (writer on SCTV, The Tracey Ullman Show, Muppets Tonight + director of Who's Harry Crumb?, 18 Again!).

Whether he is pretending to be angelic or flashing satanic looks, Short makes Clifford an often riotous comic creation. And Grodin, with his fussy airs, makes a perfect fall guy.

There are plenty of laughs here, and Short is clearly having a ball portraying a Damien-like kid ...

The kid is obnoxious from start to finish, and the way he fantasizes about his uncle's girlfriend (Mary Steenburgen) is tasteless.