The Dogs Of War [special Edition] 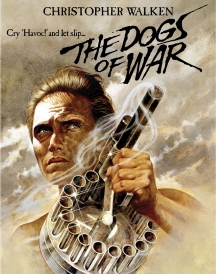 Christopher Walken (Pennies from Heaven, Heaven's Gate, The Deer Hunter) is a brutal mercenary who must fight the ultimate battle - against his own conscience - in this powerful action thriller with a "heart-thumping tempo" (The Hollywood Reporter).

'Mr. Walken is unusually convincing in a difficult, hermetic kind of role.'

'The Dogs of War is a guilty pleasure.'

'Walken has rarely delivered such an earthy, physical performance, and his character gives as well as he takes.'

Walken is the central reason to watch Dogs Of War. His intensity in this early period of his career could be off-putting, but it fits Shannon like a glove, his glazed stare and choppy line readings suggesting a person who knows life is cheap and words cheaper still.

Sourced from a fresh 2K interpositive scan (so says the marketing blurb), Scorpion Releasing does generally fine work on this print.

Walken has rarely delivered such an earthy, physical performance, and his character gives (the glass-in-the-mouth scene is swift, brutal, and incredible) as well as he takes (Leonard Maltin noted that “Walken takes a screen beating nearly as impressively as Brando”).