In a world where ruthless corporations reign supreme, Rollerball is the only outlet for the pent-up anger and frustrations of the masses. 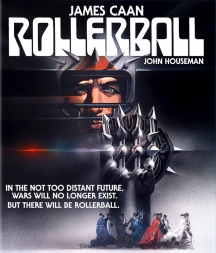 The year is 2018. There are no wars. There is no crime. There is only....the Game. In a world where ruthless corporations reign supreme, this vicious and barbaric "sport" is the only outlet for the pent-up anger and frustrations of the masses. Tuned to their televisions, the people watch "Rollerball": a brutal mutation of football, motocross and hockey. Jonathan E. (James Caan; The Killer Elite, The Godfather, Misery, Freebie and the Bean) is the champion player - a man too talented for his own good. The Corporation has taken away the woman Jonathan loves, but they can't take away his soul - even if the diabolical corporate head (John Houseman; Three Days of the Condor, The Paper Chase, The Fog) tells him he better retire.... or suffer the old-fashioned way. Also starring John Beck (Audrey Rose, The Other Side of Midnight), Maud Adams (Killer Force, Octopussy, Tattoo), Moses Gunn (Ragtime, Shaft), Shane Rimmer (The People that Time Forgot, The Human Factor), and directed by Norman Jewison (The Thomas Crown Affair, In the Heat of the Night, Jesus Christ Superstar). With its surrealistic imagery and tense action sequences, Rollerball grips you by the heart - and never lets you go. Now watch this cult classic from a 4K scan!

Norman Jewison's sensational futuristic drama about a world of Corporate States stars James Caan in an excellent performance as a famed athlete who fights for his identity and free will.

The signs are still there, and if anything, they're more pronounced than they were in 1975. Rollerball is first and foremost, a good movie. It has strong characters, a good plot, and lots of action. It is also a social commentary.

Rollerball is a very smart, very thrilling social commentary which frames the class struggles in terms that date back to ancient Rome.