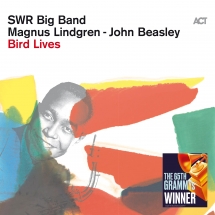 Bird Lives feels like a soundtrack for an imaginary film co-written by Lindgren and Beasley. The SWR Big Band performs with a string section of 10 players, but this recording is not a re-creation of Parker's "Bird With Strings" albums.

"We wanted to introduce new generations to Bird's music, but we also wanted Bird fans to hear his music in a fresh and new approach," Beasley explains, noting that near the end of his life, Parker idolized Edgard Varese and was longing to bring more structure, depth and variety into the way he wrote for orchestra. "We didn't want to repeat what that has been done before, but rather create something different," adds Lindgren. The choice of compositions is true to the duo's aim: there are Parker originals such as "Scrapple from the Apple," bursting with bebop, there are also some of his favorite standards, such as the opening "Cherokee/Koko" mash-up and the grand finale "Overture to Bird". But above all the great arrangements suit the context: they not only play to the strengths of the classic big band and of Parker's endlessly inventive music, but also enhance them with newer stylistic elements, such as a joyous celebratory funk reading of "Confirmation".

Charlie Parker was still in the early stages of working with orchestras when he died at the all too early age of 34. "Bird Lives" may chart territory fulfilled dreams that Parker was not able to explore in his short lifetime. This recording has nothing of the "museum-piece" about it: this is music both of and for our time.