Surrendering to the music he loves, interpreting the songs and sharing with others, LET GO remains true to Sam Taylor's musical values. 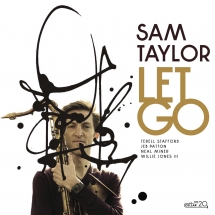 Harlem based saxophonist and Philadelphia native, Sam Taylor presents his third release for Cellar Live,featuring trumpet master Terell Stafford. Recorded at Van Gelder Studios in January of 2022, a time when much of what we believed in as a society was being redefined and reimagined, Taylor chose to invite his musical elders to join him on a journey of generosity and letting go. Surrendering to the music he loves, interpreting the songs and sharing with others, LET GO remains true to Sam Taylor's musical values. There is an emphasis on mentorship and tradition, as Terell Stafford was a childhood hero of the young saxophonist while in Philadelphia. Joined by Jeb Patton (piano), Neal Miner (bass) and Willie Jones III (drums), Taylor and Stafford joyfully perform a collection of songs by the great Barry Harris, Benny Golson, and Coleman Hawkins, along with interpretations of rarely played standards from the American Songbook. The title track, LET GO, is an original by Taylor, his first to be recorded. The quintet swings hard and with purpose, honoring the spirit of those who came before, with a clear message: Music is an act of giving. Let go.

An old soul...a mature musician who's wise beyond his years. Taylor just dishes it out straight and honest.

—Dan Bilawsky, All About Jazz

Sam's playing rings in my ears and continues to do so as he sculpts his solos, offering deep candor, heartfelt truths -