Sam Taylor letï¿½s one know what his musical values are, playing with honesty and grace. 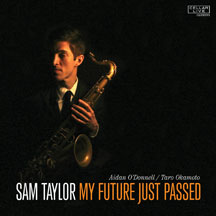 With his debut recording, saxophonist Sam Taylor letï¿½s one know what his musical values are, playing with honesty and grace, and remaining true to the folk elements of the music. An openhearted, lyrical storyteller, Taylor delivers his message with a big, authentic tone on the tenor and a great sense of swing. The album is comprised of lesser-known gems from the American Songbook, including the tender ballad ï¿½My Future Just Passedï¿½, from which the album gets its name. The trio is a working band, who has developed their sound and repertoire in the heart of Harlem, New York. Drummer Taro Okamoto is a true force of nature, a 40 year veteran of New York with credits that include Hank Jones, Gary Bartz, and Duke Jordan. Aidan Oï¿½Donnell is a much in demand bassist, both virtuosic and extraordinarily musical in his approach. Together, they create music that touches your heart, tells a story in an organic way through beautiful melody and a toe-tapping beat.