The project has been awarded the American Musicological Society's prestigious Noah Greenberg Award, 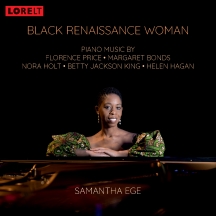 musicologist and pianist Dr Samantha Ege will record an album of forgotten piano music by five trailblazing yet overshadowed women composer-pianists of the Black Chicago Renaissance, including the first recording of the sole surviving work by Helen Eugenia Hagan. The project has been awarded the American Musicological Society's prestigious Noah Greenberg Award, and will be launched in March 2022 on the LORELT label, dedicated to recording work by important and neglected composers. Ege and pianist Thomas Graff head to the studio on 29 December 2021 to create the first recordings of the piano concertos by Hagan and Florence Price in the two-piano arrangements that are testament to the supportive culture that allowed these remarkable composers to have their works performed and distributed. The music of all five composers remains seriously underrepresented on disc. The first known African American woman to earn a Yale degree, Helen Eugenia Hagan (1891-1964) performed in 1912 as the soloist in her own Concerto in C Minor for Piano and Orchestra. Ege and Graff perform the surviving two-piano arrangement of this, her only remaining work. The music of Hagan is heard alongside Nora Douglas Holt (1884-1974), a singer, pianist and composer, and the first African American to receive a master's degree in the United States. Of her over 200 compositions, only her two self-published works remain, including Negro Dance, the sole manuscript copies of the rest having been ransacked from a storage facility while she toured abroad.Florence Price (1887-1953) is best known for her Symphony No. 1 in E minor, performed by the Chicago Symphony Orchestra in 1933, the first African-American woman to have her music presented by a major American orchestra, following interventions by the African American community leader Maude Roberts George and the support of the women of the Black Chicago Renaissance. Much of her work came perilously close to being lost following her death, with a collection of her manuscripts rediscovered in a dilapidated house in St. Anne, Illinois in 2009. Her Piano Concerto in One Movement (1934) combines virtuosic harmony with a traditional African-American juba dance, and was performed for the first time at the BBC Proms in 2021, where Ege was invited as a guest speaker. Ege and Graff present the first recording of the two-piano arrangement by Price. The music of Florence Price is joined on disc with works by the Chicago musicians Margaret Bonds, her pupil and close friend, and Betty Jackson King (1928-1994), a pianist, singer, educator, choral conductor, and composer who served as the president of the National Association of Negro Musicians from 1979 to 1984. Ege performs her Four Seasonal Sketches which move from the joys of spring to the depths of winter. The album opens with a showpiece suite by Margaret Bonds (1913-1972), who had studied under Price and sought out lessons from Nadia Boulanger. Boulanger is reported to have said that she needed no further study and to have refused to teach her. Bonds was a close friend of the poet Langston Hughes. Written for herself to perform, her resplendent Spiritual Suite (1930-40) draws on the spirituals she heard as concert encores given by legendary singers including Marian Anderson. Only one movement, Troubled Water, was published during her lifetime, with the whole suite not restored until last year.