A showcase for his extraordinary talent and versatility as an entertainer 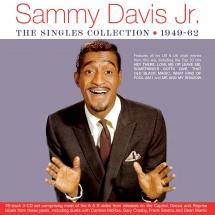 Sammy Davis Jr. was a multi-talented artist, a singer, dancer, stage and movie actor, comedian and TV personality, whose career encompassed not only performing and recording in those arenas, but also film and TV direction. Later famous as a member of the Rat Pack, he made his first records in 1949, but came to the fore after performing at the 1951 Academy Awards, to develop his many-faceted career. With a style rooted in old school big band music, he expanded his musical scope to have a dozen or so hits during the era covered by this collection, and as many again in subsequent years, as well as being a highly successful album seller. This great-value 78-track 3-CD set comprises most of the A & B sides from releases on the Capitol, Decca and Reprise labels from these years, including duets with Carmen McRae, Gary Crosby, Frank Sinatra and Dean Martin. It features all his US & UK chart entries from this era, including the Top 20 hits "Hey There", "Love Me Or Leave Me", "Something's Gotta Give", "That Old Black Magic", "What Kind Of Fool Am I" and "Me And My Shadow". The repertoire and the style of his performances and the production range across sophisticated pop, big band jazz, straight chart-focused pop, classy ballads and novelty-ish pieces, all making for a varied showcase for his extraordinary talent and versatility as an entertainer.