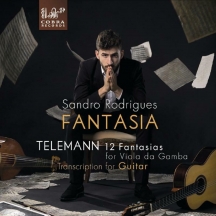 Although his works were published both in Paris and in Germany, and these were acquired and distributed by musicians from all over Europe giving him more popularity than Johann Sebastian Bach, he was soon ignored and belittled until interest in his music gradually resurfaced in the twentieth century, thus slowly regaining the place that recognizes him as one of the great composers of his time. In this gradual process of recovering Telemann's music, it has taken place sporadically and re-highlight the work of the Magdeburg composer. This is the case of the Fantasies pour la Basse de Violle, a collection of twelve fantasies for viola da gamba transcribed for guitar on this CD. The twelve fantasies were written and released by Telemann's own publishing house in Hamburg in 1735 and considered lost until an original print was found in a private collection in 2015. These fantasies are instrumental compositions with origin from the Renaissance and are characterized by coming 'only from the fantasy and skill of the author', with formal and stylistic aspects that can openly vary between a free and improvised character to strict counterpoints and more or less standardized forms. They are therefore part of Telemann's music collections for unaccompanied instruments, together with the XII Fantasias per il Violino, senza Basso, the twelve fantasias for flute and the thirty-six pieces for keyboard, all written between 1732 and 1735.

Portuguese guitarist Sandro Rodrigues has taken it upon himself to transcribe these recently discovered Fantasias for the Viola da Gamba for guitar. After trying the first few transcriptions on guitar he found that this music works very well for this instrument also due to the similarities between the viola da gamba and guitar. On this CD Sandro Rodrigues brings the music of Georg Philipp Telemann to the 21st century on guitar without losing the soul of the 12 Fantasias.