He lost the face of the woman he loved... So he gave it to someone else. 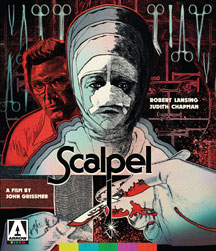 In Scalpel, Lansing plays Dr. Phillip Reynolds, a man whose daughter Heather (Judith Chapman, As the World Turns, General Hospital) has run away from home a year prior following the suspicious death of her boyfriend. When he happens across a young woman one night, her face beaten beyond recognition, the unhinged Reynolds sees his an opportunity to put his trusty scalpel to use - hatching a plan to "reconstruct" her face in the image of his missing daughter, and so claim her sizeable inheritance.

Photographed by celebrated cinematographer Edward Lachman, who would go on to serve as DP on the likes of Erin Brockovich and The Virgin Suicides, Scalpel is an exemplary slice of Southern-fried gothic, filled finally rescued from VHS obscurity in this revelatory new Blu-ray edition from Arrow Video.

Arrow Video's presentation of the film saves it from obscurity... It's also not a horror film by definition, but genre fans will find plenty about to appreciate.