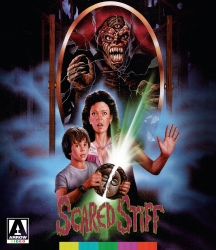 TV star Mary Page Keller (Pretty Little Liars) appears alongside Andrew Stevens (10 to Midnight, The Fury) as a couple terrorized by an age-old curse in this much-underrated late-80s offering from director Richard Friedman. Keller plays Kate Christopher, a singer who moves into an old colonial mansion with her son and psychologist boyfriend David (Stevens). But when they make a strange and gruesome discovery in the boarded-up attic, it soon becomes clear that the mansion carries with it a dark and blood-stained past - and one that is about to terrorize them in the present. The second feature helmed by Richard Friedman, who went on to direct such genre favourites as Doom Asylum and Phantom of the Mall: Eric's Revenge, Scared Stiff (AKA The Masterson Curse) builds to an astonishing practical FX-laden climax sure to please fans of 80s horror.

Fans of this film should certainly enjoy the technical presentation, and as usual Arrow has assembled some enjoyable supplements, for those considering a purchase.

Quite a nice package... The documentary is actually very enlightening, giving us a nice background on the project and how it got made. Add to that an excellent presentation and Scared Stiff is certainly a disc worth checking out.