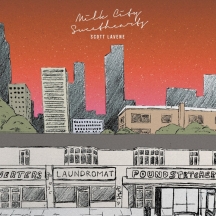 He released an album as Big Top Heartbreak, 2016's Deadbeat Ballads, and followed it with his first album under his own name, 2019's droll and marvellous Broke. "I was signed to a little label in Bristol, but then they went skint," he remembers. This time, however, the disappointment didn't shake his confidence or his resolve. "I started writing prose, like 'flash fiction', and I've begun a novel," he says. "And I've started some creative writing workshops for people who've come out of my situation." Amid all this activity, the songs that became Milk City Sweethearts began to take shape. Lavene noticed the border between his prose and his songwriting beginning to become porous, and the album feels like a clutch of excellent short stories set to music. Without a label, he recorded the album at home, and assembled it in a week in his mum's garage during lockdown's heavy manners. It's a warm, witty, charismatic record with a dark heart at the centre, Lavene sounding dislocated and therefore able to write his everyday stories with a left-handed brilliance and blunt honesty that keeps them so fresh, like classic Kinks, or David Bowie if he'd never had to go to space to feel otherworldly. His songs are talking blues, set to loose and minimal and excellent art-rock with a pop sensibility, the honk of Roxy sax and the guttural weird-funk of Ian Dury's Blockheads haunting their grooves. And when he stands gazing at worms writhing in the mud, he sees the maddening, contradictory entirety of himself, and all of us. "I have an extreme personality," he says. "I can entertain a roomful of people, but what I mainly want to do is be alone. It's an honest and poignant song, but it's still really funny. I know I'm not the only person who feels that way. I've had people tell me my gigs made them laugh, and then moments later they wanted to cry. In the end, people want to feel things, don't they?"

Sounds like an updated version of something that Stiff records would have released in the 70's.