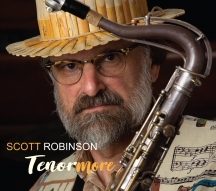 Tenormore, the album title that is also the name of the final tune, has a couple of meanings, according to Scott: "It continues the idea of 'Tenor Eleven' and 'Tenor Twelve,' but in a more complex way. The piece is structured in ten-bar sections, each followed by an indeterminate number of additional bars, (i.e., "ten or more"). The drums provide the extra, open, bars during the composed parts.

Reviews coming in JazzTimes and other publications

''Tenormore, the vibrant new album by saxophonist Scott Robinson, is the story of a beautiful friendship between a man and his horn...''
Michael Roberts
JAZZIZ MAGAZINE

After decades of demonstrating his facility on virtually of the reed instruments, Scott Robinson decided to put together an album that makes a clear statement: ''I'm still a tenor player at the core.'' And that statement comes across loud and clear on this quartet date, though his eclecticism comes through in other ways, notably in his arrangements: the Beatles ballad ''And I Love Her'' performed as an unaccompanied sax solo; the Tin Pan Alley classic "Put on a Happy Face" arranged as a ballad; ''The Nearness of You'' cast as organ-driven quiet-storm bedroom funk; the deeply gospel-informed "Rainy River" (written by Robinson's drummer here, Martin Wind). Robinson's originals are interesting in their own ways: ''Tenor Eleven'' sounds like bebop as written by Hindemith, while the title track is funkier and more experimental, though never completely out. Overall, this is an album that would find a welcome home in any library's jazz collection.

4 STAR REVIEW
As longstanding multi-reed specialist in the Maria Schneider Orchestra, Scott Robinson has been showcased on numerous instruments over the years, including such oddball axes as ophicleide and theremin. On Tenormore, his 20th outing as a leader, Robinson exclusively performs on the silver 1924 Conn tenor saxophone he's had since 1975. In the company of pianist Helen Sung and the veteran rhythm tandem of bassist Martin Wind and drummer Dennis Mackrel, he swings effortlessly and delivers a singing quality on several originals, while also incorporating some unconventional twists on three standards and one familiar pop tune. Robinson kicks it all off in daring fashion with an unaccompanied reading of The Beatles' 'And I Love Her,' which he opens in the altissimo range of his horn, before detouring into the Dolphy zone on one 'out' interlude during his unhurried reading of the ballad. 'Tenor Eleven,' a boppish 11-bar swinger, gives Sung plenty of room to stretch harmonically on her propulsive solo and also features a kinetic breakdown between tenor and drums. 'Tenor Twelve' is an angular tune that again turns Sung loose on her solo and features more fiery group interplay. A winning set by a copacetic crew.