Christopher Columbus Might Not Be Who You Think He Was. 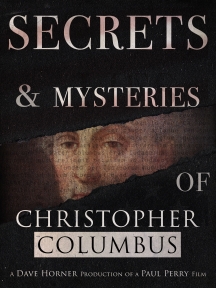 Was Christopher Columbus born in Genoa, Italy? Most definitely not, say an unlikely collection of experts from European royalty, DNA science, university scholars, even Columbus's own living family. Rather he was so much more, and this ground breaking documentary proves it. Three researchers follow a trail of proof through the Iberian Peninsula - two Americans and one Portuguese - to find hard evidence that the Columbus we all know from history books isn't that Columbus at all. Follow this team of explorers as they reveal several new facts about the man credited with discovering America, including: • Columbus was not a poor boy from Genoa but the bastard son of a Portuguese Duke and a member of royalty, which explains why it was so easy for him to enter the royal courts of Europe. • The mother of Columbus was Jewish, which clearly explains why he left money to the Jews of Lisbon in his will, was funded by Jewish bankers in his voyage to the New World, and why he planned to create a New Jerusalem in the New World. • Columbus was a spy for King John II of Portugal, as evidenced by a letter of safe passage given him by the King, making him unpunishable in Europe, even for murder. Plus he helped "rearrange" the map of the world to give Brazil to Portugal, a land only the Portuguese knew existed in the 15th century. The facts in this movie change the history books!!