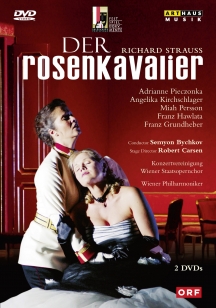 Arthaus presents one of the most talked about productions of recent Salzburg festival years – the 2004 staging of Strauss’ Der Rosenkavalier. The musical comedy has a deep-rooted performance tradition at the Salzburg Festival, but Robert Carsen’s new reading opened up a new view of this operatic staple while Bychkov, Semyon leading the Vienna Philharmonic and a cast of internationally renowned singers guaranteed a high musical standard. Bychkov, Semyon conducts Strauss with flexible nuances and a great deal of energy and the Neue Zürcher Zeitung praised the conductor’s ability to make the dense textures of the score transparent and to throw light on the subtleties of the instrumentation”. The musical side of the performance was additionally sustained by the experience and longstanding Strauss tradition of the Vienna Philharmonic, according to the Münchner Merkur, the only orchestra in the world that is capable of such decadent excesses and such gloriously honed waltzes.” Carsen marked the work with a coherent vision, cleverly holding its three acts and almost 200 stage personnel together.The wide stage of the Großes Festspielhaus allowed him to keep the main action centre-stage, while the surrounding spaces were used to comment on the action.