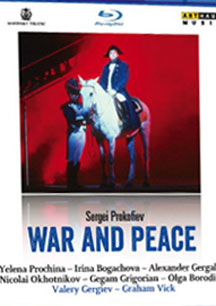 Sergei Prokofiev devoted the last twelve years of his life to War and Peace. He completed the instrumentalisation by April 1942 and the entire score was ready in March 1943. Having completed the first version (containing eleven scenes) unusually quickly, the composer continued working on the opera over the next ten years. Consequently, the work has appeared in different versions and orchestrations.Tolstoy’s massive chronicle of Russian family life during and after the Napoleonic Wars is one of the greatest novels in world literature and is very close to the hearts and experiences of the Russian people. During World War II, another ‘great patriotic war’, the Soviet authorities, in the face of the Nazi invasion, pasted pages of Tolstoy’s book on to public buildings. Writing his final opera during this momentous period, Prokofiev very skilfully captured Tolstoy’s piercing insight into human nature, choosing dramatic key moments from Tolstoy to reflect private and public destinies against a background of Russia under threat. This production of War and Peace was mounted at a time when the country was again undergoing momentous changes.The greatest landmark in the stage history of the opera came with the 1991 production at the Mariinsky Theatre, when Prokoviev´s complete score was performed for the first time with no cuts (the musical director and conductor was Valéry Gergiev and the production was directed by Graham Vick and designed by Tim O´Brian). This production, staged at the start of the third millennium, presents a fresh reading of Prokofiev´s masterpiece.