This concert captures one of the rare occasions on which Sergiu Celibidache consented to a recording being made. 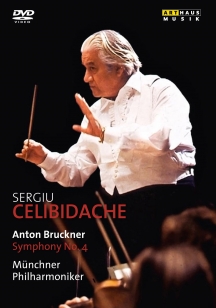 The Romanian conductor Celibidache, Sergiu (1912-96) was one of the most adamant personalities in the musicworld. He rehearsed three times as much as other conductors and avoided making recordings because he believed they were a false representation his musical intentions. This concert from the Herkulessaal in Munich captures one of the rare occasions on which he consented to a recording being made. He conducts the Munich Philharmonic Orchestra with Anton Bruckner’s Romantic” Symphony No. 4 in E flat major.