This is the portrait of a conductor who combined analysis and passion, ruthlessness and sympathy - a meastro furioso. 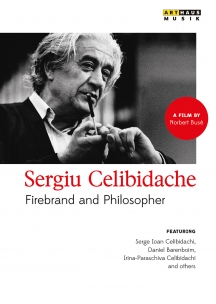 Celibidache was a man of extremes – or rather: his human nature was extreme. He hated nothing more than indifference, lukewarmness and mediocrity – in himself most of all. He could have an entire auditorium rolling with laughter, while he regaled them for hours with anecdotes recounted with huge comedic flair. Or he could descend into bouts of the deepest pessimism and despairing bitterness. For his person combined painful inner contradictions with the serenity of what he thought through with rigour andclarity.Norbert Busè’s film is a moving portrayal of the legendary conductor. In the making of it he chanced upon a minor coup: Celibidache’s curriculum vitae, discovered in the archives of the Musikhochschule in Berlin, and falsified by the conductor in order to enhance his career. But the film’s focus is also on the man who seemed always so aloof. For the first time there are interviews with Celibidache’s sister and son Serge, whose own film portrait of his father is to be broadcast in extracts as a TV premiere. This is the portrait of a conductor who perhaps more than any other combined analysis and passion, ruthlessness and sympathy – a maestro furioso.