Sgàile is the solo project of Scottish multi-instrumentalist Tony Dunn (ex-Falloch, Saor and Cnoc An Tursa) 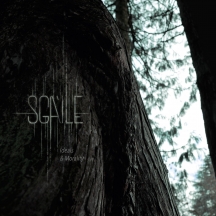 Sgàile is the solo project of Scottish multi-instrumentalist Tony Dunn, a venture that was a long time in the making due to Dunn's commitments with other bands such as Falloch, Cnoc An Tursa and Saor. "For almost a decade, I had concentrated on playing other people's songs, singing other people's lyrics, and not feeling that I had an identity of my own. The name Sgàile means "ghost" or "shade" in Gaelic, and this was born from the fact that I didn't quite "fit in" with the Scottish Black Metal scene that these bands were an integral part of". In August 2018, Dunn parted ways with Saor in an amicable manner. It was then and there that "I decided to really concentrate on putting out a body of work that I could put my own name to and be proud of". Sgàile was officially born. Ideals & Morality was conceived, composed and recorded in most of its parts in late 2019/early 2020. At this point Mike Lamb (Sojourner, Light Field Reverie) was brought on board for the mixing and mastering. "He had a look at the quality of the recordings, and gave me a great deal of advice, so much that in late summer 2020 we decided the best course of action was to re-record all of the guitars and bass from scratch. So in essence, Ideals & Morality was recorded twice". Sgàile's debut is an emotional record. "It is a record that I feel is both melancholy and quite dark in places, but uplifting and inspiring in others, as during the recording sessions I felt like I was in quite a low place at times mentally, but the actual writing process itself lifted my spirits. I feel that the album certainly has the potential to both haunt and elate in equal measure". Lyrically, it's almost a stream of consciousness of various aspects of Tony's psyche, dealing with his love for Scottish mountains ("The Summit"), the feeling of becoming a parent ("Instinct") or even the experiences of the past decade ("Facade"). Every song comes from its own background, making Ideals & Morality a multifaceted experience.