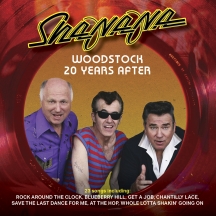 Sha Na Na, the popular 1950s revival group which has sold over 20 million records and starred in its own syndicated television series, was one of the performers at the original 1969 Woodstock Music Festival. Twenty years later, the band joined original fellow musicians for the "Woodstock: 20 Years After" concert held 3,000 miles away at Cal-State Dominguez Hills in Carson, California on August 20, 1989. Sha Na Na's appearance at Woodstock was only the band's eighth performance. Formed during the 1968-69 school year at Columbia University, the idea for the band was conceived by George Leonard, a humanities graduate student, who also became the group's choreographer. The original lineup featured a dozen members and performed a song-and-dance repertoire based on popular '50s rock and doo-wop hits. "Within two months we were the hottest rock act in New York, held over weekly at Steve Paul's Scene, where the stars themselves partied. One night Janis Joplin ran backstage to kiss us, reeking of Southern Comfort," recalled Leonard. According to the band's drummer, John Fair "Jocko" Marcellino, it was on the final night that Steve Paul's Scene was open that Jimi Hendrix personally introduced Sha Na Na to Woodstock's producers, Michael Lang and Artie Kornfeld. "We were booked that night," Marcellino told Yahoo Entertainment's Lyndsey Parker. "We got $350, the check bounced, and we got a dollar to be in the movie. But that was a good dollar." Their high energy presentation and set-closing rendition of "At the Hop" was a highlight of the concert and appeared in the documentary film. The movie helped make Sha Na Na a U.S. sensation and triggered a '50s nostalgia craze that inspired the Broadway musical Grease, American Graffiti, and the 1970s television series Happy Days. When the film adaptation of Grease arrived in 1978, the accompanying soundtrack included six songs by Sha Na Na, and the group performed two songs in the film as as Johnny Casino and the Gamblers.