Wei Fung is hired to infiltrate a clan of rebellious Ming loyalists, but he falls in love the clan leaders granddaughter and his plans are discovered. 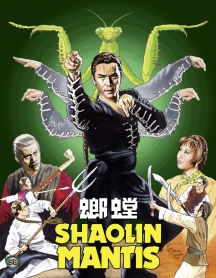 Direct from the golden age of Hong Kong martial arts cinema comes Shaolin Mantis another fast paced fight fest, from the mighty Shaw Brothers studio. When scholar Wei Fung (David Chiang) is hired by the Emperor to infiltrate a clan of rebellious Ming loyalists, his mission goes adrift when he falls in love the clan leader's granddaughter and his plans are discovered. From legendary director and star Lau Kar Leung (The Spiritual Boxer, The 36th Chamber of Shaolin) Shaolin Mantis is another superlative entry from the never ending showcase of 70s martial arts productions. An absolute must for collectors of classic Shaw Brothers movies.

It's tense, exciting, as violent as it needs to be and overall just really well made.

There's something just kind of uniquely charming about a fighter taking "boxing tips" from a praying mantis, but aside from that pretty whimsical element, Shaolin Mantis manages to craft an interesting story rife with political intrigue but which also plays into ideas of personal loyalties.

Shaolin Mantis’ twist ending nears legendary status, divisive in the fandom, but compelling given how serious its plays.

An absolute must for collectors of classic Shaw Brothers movies.

Shaolin Mantis is a fine mix of action, intrigue and romance.

Shaolin Mantis gets a good release from 88 Films that comes with a strong audio/video presentation and a wealth of insightful extras, recommended.

If you aren’t as invested in the plots of martial arts movies, worry not as “Shaolin mantis” has no shortage of action sequences.

There's not a whole lot of fighting in this one but it really does get out a lot of good parts when it does, generating a highly rewarding series of encounters to escape the different levels of the hideout and the brilliant brawls to get into the palace at the end that sets up the final fight.

An absolute must for collectors of classic Shaw Brothers movies!

Don’t miss: Extras include two commentary tracks, a featurette about the movie and an interview with actor John Cheung.

This is something you really have to see for yourself.

It also has a shock ending that made me love this film.

Fans of ‘70s chop-socky films will enjoy both of these high quality releases.

Fans of ‘70s chop-socky films will enjoy both of these high quality releases.

Both of them look and sound terrific.