A new look at the face of evil 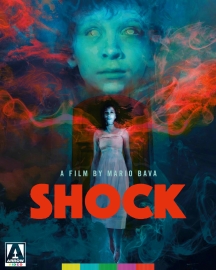 In a career spanning four decades and encompassing virtually every genre under the sun, Mario Bava inspired multiple generations of filmmakers, from Dario Argento to Martin Scorsese and Tim Burton. Best remembered for his gothic horror movies, for his final feature, Shock, he eschewed the grand guignol excesses of Black Sabbath or Blood and Black Lace for a more intimate portrait of mental breakdown in which true horror comes from within. Dora (Daria Nicolodi, Deep Red) moves back into her old family home with her husband, Bruno (John Steiner, Tenebrae), and Marco (David Colin Jr., Beyond the Door), her young son from her previous marriage. But domestic bliss proves elusive as numerous strange and disturbing occurrences transpire, while Dora is haunted by a series of nightmares and hallucinations, many of them involving her dead former husband. Is the house itself possessed? Or does Dora's increasingly fragile grip on reality originate from somewhere far closer to home? Released in the United States as a sequel to Ovidio G. Assonitis's Beyond the Door, Shock more than lives up to its name, proving that, even at this late stage in his career, Bava hadn't lost his touch for terror. Now restored in high definition for the first time, the Maestro of the Macabre's chilling swansong disturbs like never before in this feature-laden release from Arrow Video.

An effective, scary horror movie in its own right

Shock certainly delivers the goods in its effectively disturbing portrayal of a boy possessed. The slight-of-hand camera trickery that Bava had mastered with nearly 20 years in the director's chair is equally effective

Shock more than lives up to its name, proving that, even at this late stage in his career, Bava hadn’t lost his touch for terror. Now restored in high definition for the first time, the Maestro of the Macabre’s chilling swansong disturbs like never before in this feature-laden release from Arrow Video.

In a career spanning four decades and encompassing virtually every genre under the sun, Mario Bava inspired multiple generations of filmmakers, from Dario Argento to Martin Scorsese and Tim Burton.

As the final film from horror legend Mario Bava, Shock earns a spot in cinema history.

Shock is still an effective shocker, a nice mix between haunted house flick and The Omen-style evil kid thriller.

Mario Bava is the best underrated director of all time. Thanks to Arrow Video’s new Blu-ray presentation, we can appreciate an unsetting, surreal swansong from a true artist.

Arrow Video put a lot of great featurettes on this Blu-ray. So not only will giallo fans enjoy the newly restored 2k version of Shock, but they'll be entertained for hours with the featurettes and interviews. If you are a fan of Italian horror films this brand new Arrow Video Blu-ray of Shock is a must own.

Really fun movie. This is a good creeper!

This is another appealing presentation of a cult item from Arrow. Recommended.

Mario Bava was one of the giants of Italian cinema.

Mario Bava’s final film delivers on the promise of its title Shock.

It’s a very modern style horror film, and I think today’s jaded audience will appreciate this even more now than people did when it originally was made. Bava goes all in on the domestic horror, and the film’s ending should leave you numb and gutted.

When discussing Italian horror cinema, no name looms larger than Mario Bava's. From its opening moments, Shock has all the elements that have become synonymous with the cinema of Mario Bava.

The Maestro of the Macabre’s chilling swan song disturbs like never before in this feature-laden release from Arrow Video.

A return to the stylish, atmospheric horror from [Bava's] early days (though still includes a few jarring moments of gory violence).

Those who are fans of the filmmaker’s work will undoubtably be happy with this new disk from Arrow… I highly recommend grabbing the disk.

The film’s last few minutes are intense and scary.

Arrow did a fantastic job cleaning up this movie. It looks super clear and crisp but also has a good amount of grain to maintain that classic film feel

—John Romeo, A Mind On Fire

Mario Bava is best known for his suspense sequences, and his stylistic use of color and framing. Shock is always stylishly and interestingly framed

Pick of the Week - Especially if you're a big Bava fan, which everyone should be

One hell of a neo-Gothic thriller

Made originally as a sequel to Beyod the Door, Shock is a much better movie than the first film. There are a lot of special features on here

—Mr Tony Of The Dead

The Godfather of Italian horror and thrillers is undoubtebly Mario Bava

Mario Bava’s film stretches the gap between lurid material and sophistication of execution to its breaking point.

some nifty visual touches (the boy-into-man moment is startling), and the story strengthens as it heads toward a memorable conclusion

Shock comes to a head with a frenzied finale... It features a truly ingenious jump scare that has been imitated in the likes of Annabelle and The Prodigy

An incredibly enjoyable and exciting effort with a lot to like

Shock was a worthy final film, a hybrid haunted house and possession film with a worthy mystery at the center.

It builds and builds and the last half hour of the movie has some pretty good jump scares, so I would recommend Shock. It did not disappoint

an excellent transfer, with great color, detail, and contrast.

[Mario Bava's] Shock was a worthy final film, a hybrid haunted house and possession film with a worthy mystery at the center.

A lot of fun

A brilliant bit of cinematic trickery