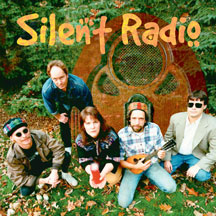 Silent Radio's debut retrospective on the MEGAWAVE label is a classic example of Ann Arbor's eclectic blend of rock, reggae, and roots. Evolving from a jam band assembled in the late 1970's, Silent Radio first formed in 1982, played in the Ann Arbor and Detroit areas, and achieved its present form in 1984. The band members' different musical influences are reflected in the unique styles of their original songs. Greg Kjolhede and Gail Baker are the two primary singer/songwriters. They are joined by Christopher "Kip" Godwin on lead and rhythm guitars, Ray Bailey on bass and backup vocals, and Scott Williams on drums, percussion, and vocals. Having moved on to solo projects in 1988, Silent Radio re-formed in 1994 for this studio project, a 15-song retrospective.