Simon Passmore - Passacaglia On A Theme Of Benjamin Britten 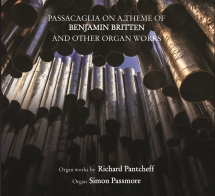 The re-emergence of a fragment of manuscript in Britten's own handwriting (a theme written for Jean Langlais to improvise upon), unseen for over fifty years, prompted composer Richard Pantcheff to write a Passacaglia on a Theme of Benjamin Britten for organ, in honor of the composer. The work, based on the Langlais theme, was written also in response to a request from organist Jane Parker-Smith for a new organ work for the Britten 100 festival in 2013.

The highly successful premiere of the work was given by Jane Parker-Smith in Essen Cathedral on 9/11/2013. This in turn led the composer to suggest to Prima Facie Records that the work should be recorded. Other recent works for organ by Richard Pantcheff are also included on the resulting CD, amongst which is the composer's contribution to the outstanding Orgelbuechlein Project, in which contemporary composers complete the Chorale Preludes of the Orgelbuechlein left uncomposed by J.S.Bach at the time of his death. Richard Pantcheff's Chorale Prelude on 'Werde munter, mein Gemuete' was premiered by Jem Stephenson on the organ of Westminster Abbey.

Other recent works appearing on this release include A Sequence for St. George, written for the inauguration of the new Rieger organ at St. George's Anglican Church in Johannesburg, South Africa. This work, like the later Voces Organi (also included here) is a longer work comprising a number of shorter movements for use during the church's year. Voces Organi uses plainsong themes as its basis, and is written to allow the colours of the organ's timbre to be vividly heard. This aspect of the work is amply demonstrated in the performance on this release featuring organist Simon Passmore on the organ of St. Ann's Church, Manchester.

Given the untimely death of Jane Parker-Smith, this 2-disc set is dedicated to her memory. She gave a number of premieres of organ works by Richard Pantcheff, of which the Passacaglia on a Theme of Benjamin Britten is the foremost.