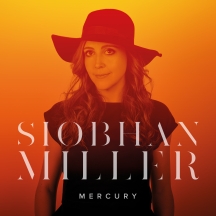 Mercury is Miller's first album of entirely original material. Recorded in Glasgow with many of her frequent collaborators, including producer Euan Burton, it also features co-writes with Lau's Kris Drever and Admiral Fallow frontman Louis Abbott. One of the themes of the album is memory, what we take with us over the years as the 'important moments', the precious nature of those memories and the curious process during which our brain decides what it will filter out without us really having control over it. Many of the songs see Miller looking at what we leave behind us in various chapters of our own lives and where we are headed for, individually and as a society. Her two previous albums received widespread critical acclaim, highlighting her extensive range through traditional, contemporary and self-penned material, as well as her "delicate, nourishing vocals and lyrically rich compositions" (The List). Winner of the 2018 BBC Radio 2 Folk Award for 'Best Traditional Track', at which she was also nominated for 'Best Singer', Miller is the only ever three-time winner of Scots Singer of the Year (2017, 2013, 2011), and widely regarded as one of the foremost vocalists in Scotland. She has made numerous TV and Radio appearances including a cameo in TV series 'Outlander'.