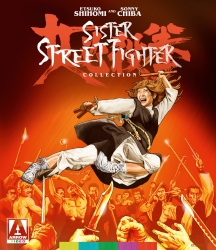 In 1974's Sister Street Fighter, Etsuko Shihomi is the half-Chinese, half-Japanese Li Koryu, who travels to Yokohama to investigate the disappearance of her brother, an undercover cop. When she discovers a smuggling ring run by a drug lord with his own personal army of deadly fighters, she must penetrate his evil lair and defeat not only his champion (Masashi Ishibashi from the Street Fighter films) but also a group of female Thai kickboxers called The Amazon Seven. Chiba appears in a cameo as a fellow karate master who helps Koryu in her mission. Released only three months later, the sequel Sister Street Fighter: Hanging By a Thread, once again follows Li Koryu as she investigates another smuggling ring, this time involving diamonds implanted into the derrieres of prostitutes! Teaming up with enigmatic fighter Tsubaki (Yasuaki Kurata), she once again calls upon her fighting skills to take down another round of colorful bad guys. The final film of the official trilogy, Return of the Sister Street Fighter, finds her back in Yokohama searching for a woman who has become the mistress of another crime kingpin. Kurata again co-stars but this time as a crazed fighter working for the villains who swears that he's the man who can kill Li Koryu. Genre entertainment of the highest order, the Sister Street Fighter films are a wild ride through some of the best exploitation cinema Japan produced in the 1970s. Funky and over-the-top, filled with wall-to-wall action, and featuring some of the craziest villains ever depicted onscreen, the series embodies female power in a male-dominated genre and is a magnificent showcase for the physical presence and martial arts skills of its lead star.