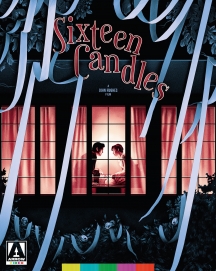 In his debut film as writer-director, John Hughes immediately cemented himself as the king of teen cinema with Sixteen Candles, and in the process also introduced one of the most iconic faces of '80s Americana: Molly Ringwald. For high schooler Samantha Baker (Molly Ringwald), her 16th birthday might be the worst day of her life. Her entire family has forgotten about it due to her older sister's impending wedding; her biggest crush, high school hunk Jake Ryan (Michael Schoeffling) has discovered an embarrassing "sex quiz" filled out by Sam in which she details how she is saving herself for him; and to make matters worse, she is hounded by a relentless nerd (Anthony Michael Hall) who won't take no for an answer. But Sam's sweet sixteen isn't over yet, and before the end of the night, all her birthday wishes could still come true... Taking the rude and crude humor of the teen sex comedies that came before it and placing it within the intimately portrayed perspective of a girl's mid-teenage-life crisis, Sixteen Candles is a bombshell of 80s pop culture that continues to be debated and beloved over three decades after its release.

This is a wonderful valentine of a movie, filled with heartwarming performances and some bittersweet truths about those awkward teen years. Arrow has once again provided a release with superior technical merits and some very appealing supplements. Highly recommended.

Arrow Video's Blu-ray release of Sixteen Candles does a fine job presenting the film in the best possible way, with a quality A/V presentation, multiple versions of the film, and a nice of bevy of bonus materials, including the film's marketing package. All in all, it's the finest version of the film on home video to date. Highly recommended.

If you're a true Hughesian, or love classic teen cinema, then this release should obviously fill a good spot in your collection.

Sixteen Candles is not only one of the greatest comedies of the 1980's, it's a perfect coming-of-age story that despite some artifacts of the time it was produced in, still stands the test of time!

A bombshell of 80s pop culture that continues to be debated and beloved over three decades after its release.