The movie that defies gravity 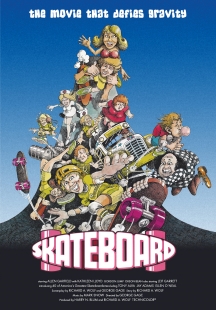 A sleazy Hollywood agent with gambling debts has to come up with cash fast. He organizes a team of exceptionally talented skateboarders to enter them in a major skateboarding competition, in spite of opposition from a dangerous gangster. If they win, they get $20,000 and the bookie leaves him alone. Manny Bloom (Allen Garfield) is a small time theatrical agent who has fallen on hard times. His troubles include not having the cash to pay alimony to his ex-wife, and even more pressing, his bookie is asking for more money from him, so what could save his skin? Naturally, a team of local skateboarders. Making up this team, are a collection of skilled skateboarders including teen star Leif Garrett, who did all his own stunts on this, plus a number of boarders from the famous Zephyr skate crew. Backing him up is Millicent a female nurse and mother figure to accompany the team as they drive around the state putting on shows and entering competitions. The footage includes highlights, with cutting edge tricks, ramps and barrel jumping, all supplying the inspiration to the young folks of the day for what they would have liked to fill up their time doing as the skateboard craze really took hold.