THEY'RE THE PATROL THAT'S OUT OF CONTROL! 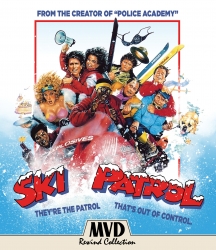 The lease on the Snowy Peaks Lodge, a popular ski resort, is up for renewal and its owner Pops (Ray Walston, Fast Times at Ridgemont High) has no worries about signing a new lease. Despite his Ski Patrol, an out-of-control group of skiers led by Jerry (Roger Rose, Friday the 13th Part VI: Jason Lives) and Iceman (T.K. Carter, John Carpenter's The Thing), the resort has an impeccable safety record. However, a devious land developer (Martin Mull, Clue) has other plans in mind for the resort and hires the talents of a young blonde named Lance (Corby Timbrook, The Glass Shield) to undermine the Ski Patrol's efforts to keep the slopes safe.

Featuring an all-star supporting cast including Leslie Jordan ("Will & Grace"), Paul Feig (Bridesmaids), Stephen Hytner ("Seinfeld") and comedian George Lopez ("George Lopez") combined with extraordinary aerial stunts, impressive snowboarding with an incredible downhill showdown, all add to the excitement as the Ski Patrol does their best to save Pop's Mountain.

A perfect example of the nothing-is-too-obvious school of comedy.