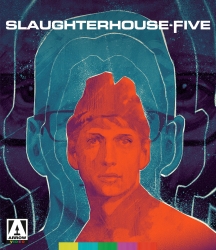 BILLY PILGRIM LIVES - FROM TIME TO TIME TO TIME... Past, present and future collide in darkly satirical fashion in Slaughterhouse-Five! Based on Kurt Vonnegut's classic 1969 novel, this tale of time travel and alien abduction emerged as part of a wave of more cerebral science-fiction films in the late 60s to early 70s, elevating the genre beyond the B-movie fare of previous decades. Upstate New York, 1968. Mild-mannered Billy Pilgrim (Michael Sacks, The Sugarland Express) finds himself "unstuck in time". Traveling back and forth across the entire span of his existence, he experiences key events of his life in a random order, including his formative years, the firebombing of Dresden and finally, at some undefined point in the future, his surreal adventures on a distant planet. Praised by Vonnegut himself for its fidelity to his novel, Slaughterhouse-Five boasts assured direction by George Roy Hill (Butch Cassidy and the Sundance Kid) and a memorable score by renowned concert pianist Glenn Gould. Now exclusively restored in 4K, Slaughterhouse-Five shines like never before, reinforcing its timeless appeal.

Kurt Vonnegut's compelling source novel about life, war, and faith is turned into a stellar film adaptation in 1972's Slaughterhouse-Five.

The film is filled with some fun performances, along with some rather interesting editing and production design choices. Technical merits are solid and the supplemental features very interesting, and Slaughterhouse-Five comes Highly recommended.

A sorely underappreciated film for most of its life, Slaughterhouse-Five is an odd but thought-provoking piece of science fiction entertainment, one that Arrow Video has finally given the deluxe Blu-ray treatment it so richly deserves. Highly recommended.