Be careful where you wander, because on March 4th Comatose Music will unleash the Hillbilly Death Brutality of SLOB's 'Deepwoods Shack of Sodomy'. 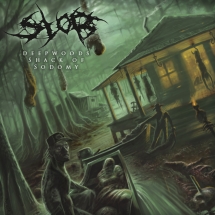 Nine years of immersion in the filth that bubbles in the deepest sewers of human society, nine years of desensitisation to horror and cruelty, nine years of fashioning the heaviest riffs, the most violent blasts and vocals to scour the insides of your intestines. The result, 'Deepwoods Shack of Sodomy' - the debut album from the UK's sole purveyors of "Hillbilly Death Brutality", SLOB... In 2013 Ross Honour (Guitar) and James Murphy (Guitar/Vocals/Drum Programming) joined forces with the aim of creating the most pulverizing expression of brutal death metal's twisted and ugly art form. They named their warped child SLOB and took the first steps along the path to the 'Deepwoods Shack of Sodomy'. Listening to the finished album is like being immersed in a truly horrific film; the sadistic assaults of the songs bound together by sound bites that demonstrate a black humor bordering on the psychotic, while the sounds of the titular deep woods enfold the sickening drama in unnerving tension. For those dedicated to the extreme SLOB deliver an electric shock to the slumbering senses, while the unwary listener will find their skin crawling and future nightmares hatching in the unexplored recesses of their mind. Songs like "Wrong Turn" and "Pitchfork Puncture Wounds" don't stand on ceremony, they simply tear you limb from limb. Comatose Music, no doubt with a nasty little snigger, will unleash this storm of perversion and terror into the world on March 4th, signalling the label's ongoing dedication to the most brutal sounds around. Despite 2022 still being in its infancy it's hard to imagine the next twelve months offering up a more savage and unforgiving album than 'Deepwoods Shack of Sodomy'. Be careful where you wander, because somewhere between the trees SLOB are waiting... and in the shack nobody can hear you scream.