Sons Of The Pioneers - Tumbling Tumbleweeds: The Chart Years 1934-49

The Sons Of The Pioneers were one of the USA's earliest western singing groups, 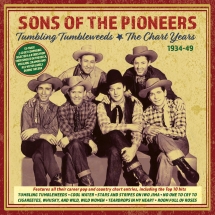 The Sons Of The Pioneers were one of the USA's earliest western singing groups, and the primary originators of what might be called "cowboy country", their songs, vocal harmonies and instrumental make-up influencing countless artists who followed them, although they were such a long-lived group that they were able to compete with many that they influenced. With their origins in California, they evolved from a vocal trio that comprised future cowboy movie star Roy Rogers, Canadian songwriter Bob Nolan, and Tim Spencer, signing to the newly-formed Decca label, before also starting to appear in western movies. This 53-track 2-CD set comprises selected A & B sides of their releases on the Decca, Vocalion, Columbia and RCA-Victor labels during this era, and features all their career pop and country chart entries, including the Top 10 hits "Tumbling Tumbleweeds", "Cool Water", "Stars and Stripes on Iwo Jima", "No One To Cry To", "Cigareetes, Whusky, and Wild, Wild Women", "Teardrops in My Heart" and "Room Full Of Roses". "Tumbling Tumbleweeds" and "Cool Water" were such landmark songs that they were both hits twice with different recordings. The collection is a marvellous and captivating showcase for their extraordinarily sophisticated talent as a vocal harmony group allied to through songs which capture the spirit of the pioneer west in inimitable style.