From The Writer / Director of DONNIE DARKO and THE BOX! 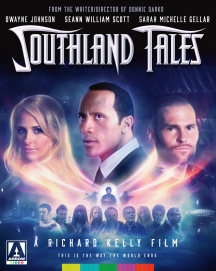 In 2001, writer/director Richard Kelly achieved cult status with Donnie Darko, an assured debut feature exploring deep existential questions through the lens of 80s nostalgia. Five years later, he followed up with a more ambitious and even more beguiling sophomore effort, in which forces of totalitarianism and anarchism collide against the backdrop of a post-apocalyptic, near-future world - the beguiling and baffling Southland Tales. Los Angeles, 2008. As the city stands on the brink of social, economic and environmental chaos, the fates of an eclectic set of characters - including an amnesia-stricken action star (Dwayne Johnson, the Fast & Furious series), an adult film star developing her own reality TV project (Sarah Michelle Gellar, Cruel Intentions) and a police officer whose identity has split in two (Seann William Scott, TV's Lethal Weapon) - intertwine with each other and with the whole of humanity. A darkly comic futuristic epic that speaks as presciently to our turbulent times as it did to the American socio-political climate in 2006, Southland Tales receives a fresh - and timely - lease of life with this new, director-approved restoration.

Southland Tales has more ideas, visual and intellectual, in a single scene than most American independent films have in their entirety.

(Richard Kelly) is a cinematic anarchist.

Is Southland Tales seemingly willfully perplexing? Yes, but the film does offer a truly bizarre assortment of plot points and attendant visuals. This is another Arrow release of a cult item that may arguably hold as much interest in its supplemental content as for the feature itself. Technical merits are solid, and the supplemental package very enjoyable. Recommended.

A major movie that's genuinely subversive, unapologetically and unsubtly political, speaking specifically to the American mindset of the PATRIOT Act era; it plays now as a time capsule, a pure shot of paranoid, W-era Id. Kelly fills the cast with 'Saturday Night Live' alumni, and perhaps that's the spirit to approach it in: hit and miss, sometimes wildly so, but capable of landing a bulls-eye on occasion.